TJ
I've lived in Ann Arbor for almost 50 years, my Mother grew up here, my Grandparents lived here. I've been coming to Ann Arbor my whole life. Let me share a little of what I know.

The last restaurant before you get to before you get to Huron Street and the beginning of what people think is the "real" downtown. Mediterranean/Middle Eastern food is not really our favorite so we went in with a little reluctance, if fact we had put off going for a week or so.

We were there on a Thursday evening and were seated in one of the booths in the front. The restaurant is long and narrow with a couple of booths in the front with the counter and the remaining seats are along one wall of the long, almost corridor like, room that runs to the back of the building. The place was hopping, as we sat there more and more people came in and by the time we left the place was almost completely full.

Dinner starts with bread and some salsa like sauce that was excellent, both the bread and the sauce, the bread especially was excellent, kind of a roll with a firm outside and a soft, moist inside. Another restaurant that does not have a liquor license so we had tea and coffee. The coffee was excellent as well.

We ordered the Dinner for Two which included soup or salad, lamb and chicken kabobs, hummus, baba ghanouj, and tabouli.
Joyce had the salad, very simple, lettuce, tomatoes and cucumbers but it was very fresh and the dressing was very good. The soup was a lamb chili that had a wonderful taste, but had some unrecognizable spices.

The dinner came with chicken and beef kabobs that included about 6 pieces of meat on each and a couple of onions and green peppers, the marinade was good and the stick had been removed for easy eating. The hummus, baba ganouj. and tabulli came in small bowls. The hummus disappeared very quickly, the baba ganouj was pungent and smokey and I liked it more than other dishes I have had. Tabouli, not my thing.

The sheesh kafta is a kind of a lamb sausage that was very interesting and really good. Even though it said it was for two we found there was plenty of food and probably could have had another person join us. We made sure we took home the meat, the rice (which was also part of the meal), and the wonderful bread.

The waitress was very pleasant and attentive. With beverage, tax and tip we got out of there for just over $30. It's very popular both for eating in and for take-out. There is a good chance we'll be back.
Posted by TJ at 4:34 PM No comments:

Sbor Latino has been touted as a breath of fresh Latino air in a town that is noticeably lacking in good Mexican Food. We didn't necessarily find that this was true.

When we arrived we found we were the only ones in the place except for the wife of the manager and her son getting ready to leave. While we were there not an additional soul came in. It was a Wednesday night but it was sort of surprising that no-one else came in. The place is set up with a lower level when you come in and a separate room, up a stair to the right. Plenty of tables.

We started with the empanadas which were the best thing that we had. They do not have a liquor license yet (although they say there will be one coming) so we had sodas. For our main course I had a chicken burrito which I thought was very bland, lots of lettuce and sauce and not that much chicken. Joyce had the three taco combo with Pork, Chorizo and Shrimp. The weak link was the shrimp that was supposed to be grilled but seemed more like it was steamed and they were the very small shrimp. The chorizo was OK but the Pork was the winner.

It was not very expensive but even so we will probably not be back even if they get their liquor license.
Posted by TJ at 4:12 PM No comments:

Metzger’s used to be located on the corner of 4th and Washington where the Arena is now but has now moved out to the west side of town on Zeeb Road. The other, the Old German was also on Washington but at the corner of Ashley. It surrounded the old Del Rio in the space that is now the original Grizzly Peak. The front door of the restaurant was on Washington but if you just wanted counter service in the bar you could use the back door on Ashley and avoid the dinner lines. But, I digress.

I got to the Heidelberg about 5pm and the main dining room was almost deserted. The Heidelberg has 3 floors. The basement is the Rathskeller, traditional German bar and this was where it was hopping, a very narrow room with a bar along the south wall and tables and booths across from it. A free taco bar (in a German Restaurant?) seemed to be the big attraction. At the far end was a raised platform with a couple of dart boards. It was lively, loud and smoky.

The third floor used to have bands on the weekends but it has now been turned into a poker club. I did not check it out.

I sat at the restaurant bar until Joyce arrived. I had a German Beer. The bartender didn’t seem too happy to be there and spent much of her time on her cell phone. The Alpine room gets its name from numerous paintings of mountains and castles hung around the room. The tables are on either side of the room corralled off from the central aisle by a wooden fence. The place is all dark wood and looks like what you would think a Bavarian restaurant would look like.

When Joyce arrived we moved to one of the tables. Our server, Dan, was right there to take our order (there was only one other table eating at the time). He suggested something from the German specialty menu. I had the Sauerbraten and Joyce went with the Knockwurst. We started with the Spaetzle special and found the noodles to be a bit soggy, I didn’t think the mushrooms too authentic but the pieces of sausage adorning the top were excellent.

The Sauerbraten was excellent but Joyce found the Knockwurst which was supposed to be spicy to be a little mild. The best thing on the menu was the side of homemade applesauce. I had the apple turnover for desert made with the same applesauce and a couple of scoops of vanilla ice cream. The applesauce was better on its own.

Prices were medium range but you could get a half order of most of the German specials which made it pretty reasonable. If you like German Food and don’t want to have to wait to get it, the Heidelberg might be your spot.
Posted by TJ at 12:05 PM 1 comment: 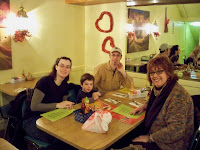 The Broken Egg 221 N. Main St. Ann Arbor, MI
When coming off the highway from the north the first restaurant the hungry traveler will encounter is the Broken Egg. The truly hungry can stop at the convenience store on the corner of Main and Summit where they have a deli case and a pizza warming light but the first true restaurant is the Broken Egg. Let’s hope these travelers are coming to town during the day because the Broken Egg is only open for breakfast and lunch.

We (Joyce, Penny, Zach, Henry and I) went on a Sunday Morning and there was no line, which is unusual for Sunday Ann Arbor Breakfasts. (It was UofM spring break so that might have been a reason although, probably, the Northside and Zola’s still had lines.) The place is pretty large, two main rooms probably sitting 35 to 40 people in each.

They decorate! We were in at the end of February and they still had the Valentine’s Day theme going so it was all in pinks and reds, a day later it would have been St. Patrick’s Day green for sure. Most of the patrons in our area were older (Henry was the only kid) and seemed to be just getting out of the early service at church or getting ready to go to the late service.

We got a table right away, our waitress (Charlene) was very attentive (some said too attentive) and perhaps a little clumsy, spilling a water glass (no one was damaged in the incident). We each ordered breakfast. The portions were large and nobody complained about their meal. We had a couple of scrambles including one called “Grandma’s Scramble” which comes with four eggs (even though you might order it with only two like Zach), Henry had pancakes with one sausage link and one bacon strip which was off the menu but offered by Charlene. I took something off the specials menu (a blackboard hanging across from the door where you enter) called “Devil’s Hash Bash” (named after our unique Ann Arbor holiday) which consisted of potatoes, onions, cheese and 3 or 4 different kinds of peppers with scrambled eggs on top. It was pretty tasty but very fiery, especially for 9:30 on a Sunday morning. It was large enough that I had to get a box to take home. Payment is made on your way out at the cash register posted next to the door.

This was not my first time to the Broken Egg and, although, not the gourmet breakfast destination in Ann Arbor, it serves up good sized portions in a relatively speedy manner. There are few pretentions and the coffee is pretty good. I’ll be back if only because the wait in line on the weekends is shorter than almost all the other good breakfast places. 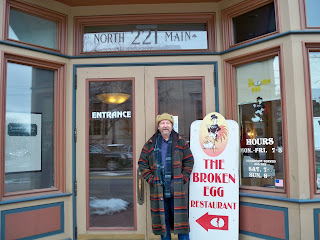 This is mostly a test to see how this looks. Having now entered the world of blogging I'll be exploring what I can do and learn from this site. But hopefully giving a little bit of fun for those who want a new slant on how to eat in your town.
Posted by TJ at 4:59 PM 1 comment: